Gamma-Aminobutyric acid, or γ-aminobutyric acid (GABA) is a neurotransmitter found in the brain. Its activity in the brain was clarified in 1957 when scientists reported that GABA produced inhibitory effects on the neurons of crayfish.

It is now widely known as the main inhibitory receptor in the human cortex, but in recent years it has become a widely available food supplement in both Europe and the United States. GABA is considered to be a ‘dietary supplement;’ as such, it can be sold without evidence to support its efficacy. GABA is widely distributed in nature. 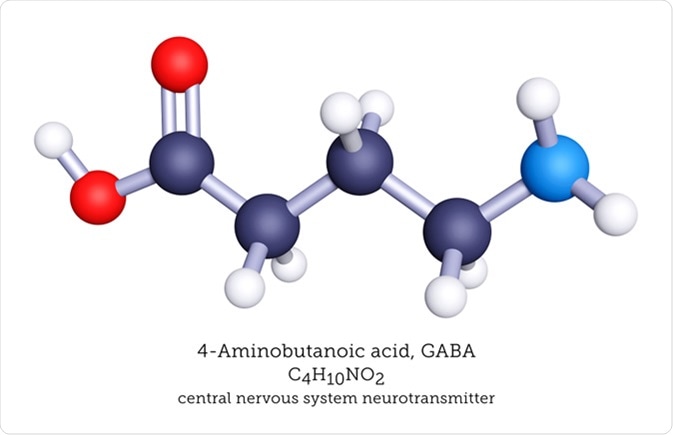 What are the role and distribution of GABA?

GABA is distributed unequally in the brain. Its inhibitory effects result from inhibition of neuronal activity and synaptic plasticity.  Although GABA's primary function is as a neurotransmitter, it has the structure of an amino acid and is therefore referred to as an amino acid neurotransmitter. GABA is produced as glutamine in the diet is converted first to glutamate, then to GABA by glutamic acid decarboxylase. In adult brains GABA is inhibitory, whereas in the embryonic brain it is a well-established excitatory transmitter that exerts region-specific roles according to the developmental stage of the embryo.

Nearly half of all synapses of the brain express some kind of GABA receptor. GABAA receptors are widely but differentially distributed within the CNS and they can be activated by several GABA isosteres, which are compounds with the same number of atoms and electrons. There are 2 types of receptors that GABA can stimulate: GABAA and GABAB. GABAA receptors are ionotropic; on GABA binding, an associated ion channel that is permeable to the negatively charged chloride ions opens to hyperpolarize the membrane potential. This decreases the likelihood of the neuron firing an action potential.

GABAB receptors are metabotropic or G protein-coupled receptors. The predominant effect of GABAB stimulation is the opening of potassium channels. As with chloride, potassium influx results in hyperpolarization, which decreases likelihood that a neuron will fire an action potential.

GABAA also has allosteric binding sites for other substances referred to as GABA modulators. These are capable of increasing or decreasing the action of GABA; in its absence, they have no effect. Depending on their effect, they are classified as positive or negative allosteric modulators (PAMs and NAMs, respectively).

A prominent example of a class of GABAA receptor positive allosteric modulators is benzodiazepines. They facilitate the interaction between GABA and GABAA, therefore potentiating the GABA inhibitory effect. These types of drugs are commonly used is for sedative purposes.

GABA and the blood-brain barrier

Historically, GABA has been thought to be unable to cross the blood-brain barrier (BBB), which throws into question the efficacy of GABA supplements to alleviate anxiety or improved sleep amongst other positive effects. However, the evidence to support GABA’s permeability is conflicting. several studies are unable to show that GABA crosses the BBB whereas others demonstrate its ability to do so.

According to an article published in Frontiers in Psychology (2015), the mechanism behind GABA supplements are unclear and further work is needed to establish the behavioral effects of GABA. The authors speculate that there is insufficient evidence to rule out the possible effect. Moreover, studies that have used GABA mimetics that do not structurally reflect the GABA molecule and delivered GABA through mechanisms that do not reflect user administration. Most notably, the permeability of GABA to the BBB has been confined to rodents.

Despite conflicting evidence for its entry into the CNS, GABBA may still affect the brain through the enteric nervous system, which contains many GABA receptors. The efficacy of GABA supplements is therefore confined to anecdotal evidence.