Myelofibrosis is a rare condition affecting the bone marrow. Following initial overproduction of blood cells, scar tissue builds up inside the bone marrow. Although it can affect people at any age, it most commonly develops in people over the age of 50.

Although the exact cause of myelofibrosis is not fully understood, mutations in several specific genes have been implicated in MF. These genes include JAK2, CALR, and MPL. It is estimated that approximately 65 percent of people diagnosed with myelofibrosis will have faults in the JAK2 gene, with 25 percent possessing faults in the CALR gene, and up to 8 percent with faults in the MPL gene.

Faults can occur in genes when cells divide and the chromosomes in the new cells are not the same as those the original cell. Faults can occur in the JAK2 and MPL genes after exposure to dangerous chemicals, but faults in JAK2, CALR, and MPL are typically due to errors made when the cell divides. 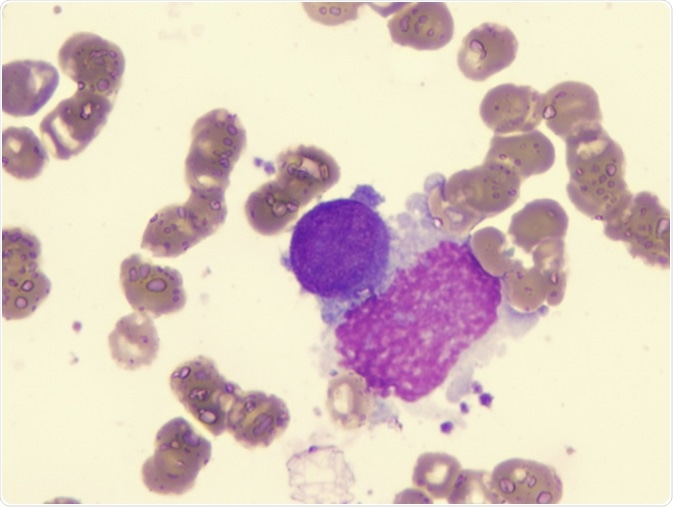 Complications caused by blood cell production in the liver and spleen

The spleen and liver cannot produce cells as effectively as bone marrow. As a result, patients with myelofibrosis can develop anemia, a condition in which there are not enough red blood cells in the blood.

The spleen may also retain some of the red blood cells it produces instead of releasing them into the blood, which can cause the spleen to become enlarged. This often produces symptoms.

Myelofibrosis does not always present any symptoms, but symptoms that do occur are usually due to a low blood cell count, or an enlarged spleen.

Symptoms that are indicative of an enlarged spleen including abdominal pain, typically on the left side, and sometimes patients will feel full very quickly after eating.

There are also a number of other diagnostic tests available to confirm cases of myelofibrosis.

There is a specific blood test available that will check for mutations in the JAK2, CALR, and MPL genes. It’s estimated that approximately 50 percent of patients with myelofibrosis have faults in the JAK2 gene, and 30 percent have a fault in the CALR gene. However, not everyone will have these faults, so these genetic tests cannot always confirm the presence of myelofibrosis.

Additional to the presence of JAK2, CALR, or MPL genes, patients may be at a higher risk of developing myelofibrosis if they match with the following risk factors. These include increased age, as myelofibrosis typically develops in those between the ages of 50 and 70, and a previous diagnosis of polycythemia vera or essential thrombocythemia, two genetic conditions affecting the bone marrow that can cause fibrosis (scarring) in the bone marrow.

There does not seem to be a bias between sexes in myelofibrosis, and men and women are equally at risk of developing the condition.

Patients with myelofibrosis are also at an increased risk of developing thrombosis, commonly known as blood clots. Blood clots are serious, and can form in the brain, eyes, heart, and abdomen. Blood clots can also form in the veins of the legs in a condition called deep vein thrombosis (DVT).

Once a patient has a positive diagnosis of myelofibrosis the disease progression will be assessed, which is categorized into three stages.

In this phase, the bone marrow will be overactive and will contain high numbers of megakaryocytes, which are stem cells that produce platelets. The amount of fibrin, the protein that is produced when blood clots and inhibits blood flow through the fibrous network, will also be present in high amounts. Blood counts will also be high in this phase of MF.

The fibrotic phase is characterized by an increased amount of fibrosis in the bone marrow, and a decrease in the amount of blood-forming tissue. A reduction in mature red blood cells, white blood cells, and platelets may also occur due to the change in bone marrow structure.

Some patients will have their myelofibrosis progress to acute myeloid leukemia, which is a type of blood cancer that affects the myeloid blood cells, including red blood cells, platelets, and certain types of white blood cell.

Blood counts, the range of symptoms, and a patient’s overall fitness will determine which treatments will be suitable. Typically, treatments aim to control symptoms of the condition. If MF is asymptomatic, treatments may not be started immediately after diagnosis, with patients being monitored with regular blood tests.

If a patient is experiencing severe anemia due to MF, regular blood transfusion may be necessary every one to three months. Platelet transfusions may also be necessary if abnormal bleeding is occurring and if platelet counts are low.

Local radiation may be used to treat an enlarged spleen, which will reduce the size of the spleen for a period of several months to approximately two years. Removing the spleen is also an option, a procedure also called a splenectomy. However, splenectomise can result in complications after the surgery.

Chemotherapy drugs can be used to reduce the amount of red blood cells being produced, which, as with any chemotherapy treatment, will produce side effects. It is important to note that it is speculated certain chemotherapy treatments for MF may increase the chances of it progressing to acute myeloid leukemia if they are used for a long period of time.

Additionally, there are JAK2 inhibitors that can reduce the size of the spleen and reduce the severity of any MF-related symptoms, but they can increase a patient’s risk of anemia.

What is the prognosis for myelofibrosis?

Prognosis for myelofibrosis is varied, with some cases of MF progressing rapidly, and others progressing more slowly. It has been estimated that approximately one quarter of patients with myelofibrosis may progress to acute myeloid leukemia.

Lois is a freelance copywriter based in the UK. She graduated from the University of Sussex with a BA in Media Practice, having specialized in screenwriting. She maintains a focus on anxiety disorders and depression and aims to explore other areas of mental health including dissociative disorders such as maladaptive daydreaming.