A book by Dav Pilkey, author of the Captain Underpants and Dog Man books elementary-age students love, has just been pulled by its publisher because of racist imagery. This comes in the wake of the recent announcement Dr. Seuss Enterprises that it will no longer be publishing six of Seuss’ lesser-known titles due to portrayals that are “hurtful and wrong.” 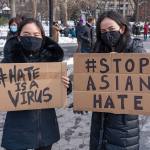 How to Talk to Your Kids About the Atlanta Shootings & #StopAsianHate

Children’s publishing giant Scholastic issued a statement last week announcing that they would halt distribution of Pilkey’s 2010 graphic novel, The Adventures of Ook and Gluck: Kung-Fu Cavemen from the Future, with the full support of Pilkey himself.

“Together, we recognize that this book perpetuates passive racism,” reads the statement. “We are deeply sorry for this serious mistake.”

The Adventures of Ook and Gluck was the second Captain Underpants spin-off, after the two-volume Super Diaper Baby series, and debuted on the New York Times best-seller list, where it remained for many weeks.

The book is filled with all the irreverence and potty humor you’d expect from a comic created by the fictional George Beard and Harold Hutchins, protagonists of the wildly popular Captain Underpants series. Ook and Gluck are George and Harold’s prehistoric doppelgängers, who must travel across time and learn kung-fu in order to save their people. At issue is the characterization of Master Derrick Wong, Ook and Gluck’s 23rd century kung-fu teacher, as well as other Asian characters that appear in the book.

He wrote, “I am a Korean-American father of two young children, ages 5 and 7. Both are huge fans of Dav Pilkey, author of wildly popular series Captain Underpants and Dog Man.” Kim explains that his children checked out Ook and Gluck from library, and, “Upon close inspection, I realized the book relied upon multiple instances of racist imagery and stereotypical tropes, including a ‘Kung Fu master’ wearing what’s purported to be a traditional-style Tang coat, dashes for eyes for the Asian characters, stereotypical Chinese proverbs, and a storyline that has the Kung Fu master rescued by the non-Asian protagonists using their Kung Fu skills (despite the fact that they were taught said skills from the supposed master).”

Within days, Scholastic announced their plans to pull the book: “Scholastic has removed the book from our websites, stopped fulfillment of any orders (domestically or abroad), contacted our retail partners to explain why this book is no longer available, and sought a return of all inventory. We will take steps to inform schools and libraries who may still have this title in circulation of our decision to withdraw it from publication.”

In a separate statement issued on his YouTube channel, author Dav Pilkey wrote of the depictions, “It was and is wrong and harmful to my Asian readers, friends, and family, and to all Asian people.”

Pilkey’s statement ends, “I hope that you, my readers, will forgive me, and learn from my mistake that even unintentional and passive stereotypes and racism are harmful to everyone. I apologize, and I pledge to do better.”

Pilkey also noted that he would be donating all of his advance and royalties from Ook and Gluck to organizations that support literacy, diversity in publishing, and the prevention of violence against Asian people.

While Ook and Gluck never achieved the notoriety of the Captain Underpants series, or TV or movie deals, the book sold well and was widely circulated for a decade before Kim finally took a stand. We hope that Scholastic and other publishers are alert to the demeaning and offensive stereotypes found in the books of even the most celebrated authors such as Pilkey and Seuss, and will work not only to prevent the publication of racist content in the future but also to publish a inclusive titles by diverse authors. As Kim’s petition demonstrated, we can, and we must, use our voices as parents to ensure a better world for our children.

Add these children’s books by Black authors and illustrators to your kids’ shelves.