Moms and dads, picture this: A land where preschool is free for all 3- and 4-year-olds, there are subsidized childcare costs for kids under 5 so families don’t go broke having their kids cared for while going to work, and everyone gets two free years of community college! President Joe Biden’s American Families Plan, which he will present to Congress tonight, would give us all this and more. It’s just on the other side of the Lollipop Forest, a.k.a. a likely Republican filibuster. 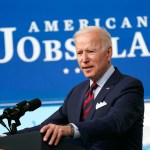 Biden’s plan would invest $1.8 trillion in children, families, childcare, and education with the goal of producing lasting economic and social benefits. To pay for the ambitious plan, Biden would raise taxes on the wealthiest households and crack down on high-income corporations and individuals who have evaded paying their fair share of taxes.

Here’s a rundown of some of the other benefits for kids and families included in the American Families Plan:

— $225 billion to subsidize childcare for families and support childcare workers so that families earning 1.5 times their state median income would pay a maximum of 7 percent of their income for all children under age 5.

— $225 billion to create a national family and medical leave program that would provide workers up to $4,000 a month, with a minimum of two-thirds of average weekly wages replaced, rising to 80 percent for the lowest-wage workers.

— $45 billion to improve school meals and offer food benefits to children during the summer.

— $9 billion for scholarships and training for teachers.

— Increase the maximum Pell Grant award to low-income students by $1,400 per eligible student.

— Permanently increase tax credits for childcare. The credits would cover as much as half of a family’s spending on care for children under age 13, up to a total of $4,000 for one child or $8,000 for two or more children.

Absent from Biden’s plan are student loan forgiveness, which Biden has said he supports, and free college to traditional four-year institutions, a key initiative of Vermont Senator Bernie Sander’s platform as a candidate in the presidential race.

The funding for the plan would be paid for by only the richest of the rich Americans. It would raise the top tax rate on the wealthiest Americans from 37 percent back to 39.6 percent (which is what it was before the 2017 tax cuts), raising taxes on capital gains to 39.6 percent for households making more than $1 million, and ending the estate tax loophole for gains in excess of $1 million.

“Investment in young children is critical if we are truly going to live up to our potential and our nation’s promise of opportunity for all,” Chrisanne Gayl, chief strategy and policy officer at the nonprofit Trust for Learning and former senior policy advisor at the U.S. Department of Education, said in a media briefing ahead of Biden’s announcement. “We know through research that an investment in young children will be returned to us tenfold, not only in the life of each child but through intergenerational impacts on earnings, incarceration rates and even health. The early care and education system, whether it’s through child care subsidies or publicly-funded preschool, is also about a critical period in brain development for young children.”

Other supporters note the focus on increasing support for communities of color.

“To build back better, we need to [be] clear about and acknowledge systemic inequities that exist and center on the needs of children and families of color, and their assets,” Iheoma Iruka, founding director of the Equity Research Action Coalition at the FPG Child Development Institute at the University of North Carolina at Chapel Hill, noted in the media briefing with Trust for Learning. “We know that ideal learning environments are possible for every child.”

Despite much support, however, Biden’s plan faces much opposition.

“The proposal faces long odds in Congress, given broad Republican opposition and narrow Democratic majorities in both the House and Senate,” noted Forbes. “At least 10 Republican senators would have to support the legislation, along with every Democrat, to overcome a Senate filibuster. Senate Democrats could try to pass the legislation through budget reconciliation, which requires only a simple majority, and that is how Congress was ultimately able to pass Biden’s stimulus package earlier this year.” Budget reconciliation is a cumbersome process, however, and some Democrats in the Senate have expressed uneasiness about using it again.

But there is hope, if we convince Congress just how popular this proposal is with voters. If you support Biden’s American Families Plan, let your representatives know how you feel. One of the easiest and fastest (and free) ways to contact them is to use Resistbot. Just text “resist” to 50409. When prompted, then text “Congress,” followed by, “I support Biden’s American Families Plan. Please vote yes!” and the bot will compose letters to your representatives.